Today we headed over the ridge and through the valley to Teodoro’s (Theodore) house. Teodoro lives about 15 minutes down a trail on the side of a ridge. The purpose of this trip was to bless him and his family with some much needed food and other gifts. As we hiked in we saw several houses that had thick black wisp of some coming out of them and wondered what it was. There was a huge sense of oppression and lack of joy on the area. 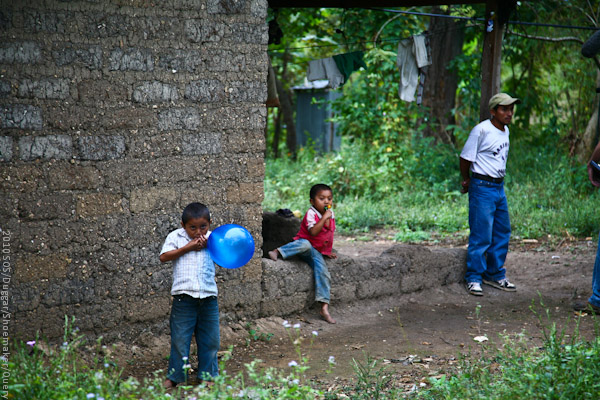 Three years ago Teodoro was heavily involved in voodoo, witchcraft, and satanic worship. During this time he lived to serve Satan and his demons. It was an all controlling force that surrounded him. During this time he was called to come up onto the pinnacle of a local mountain. There he met with Satan and Satan gave him this charge. He told him to go and kill the leaders of SOS ministries starting with Mike Schaudt (founder, director, and our trip leader of SOS) By the grace of God SOS was protected during this time. Along this same time SOS was ministering in his village and the surrounding area. Through their work Teodoro saw the love of God time and time again.  What a great contrast the love of the one true God was to the oppressive controlling power of Satan. Through this Teodoro came to have a personal relationship with the Lord and has now become one of the leaders in the church. Because of his denial of Satan he is under constant persecution from those in his village and the surrounding area. Through all this he still boldly proclaims the love of Christ, even across the lintel of his door. Dios Es Mi Escudo – God is my shield! What a bold proclamation. 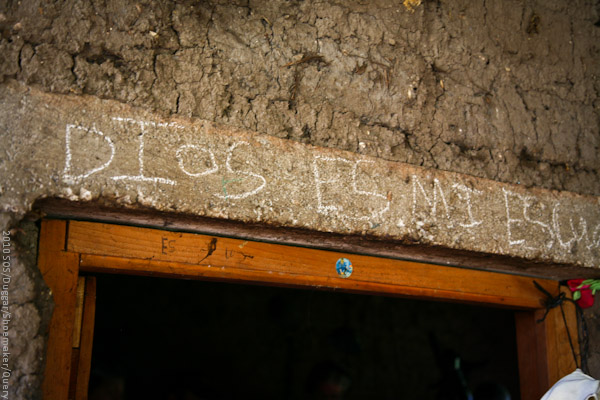 As we were leaving some asked Alex and Teodoro what the black smoke was. They told us that the people of the village heard we were coming so they were offering incense to their God’s to attempt to hurt us and offset the work we were doing. When you hear that all you can do is praise God that his work is being accomplished and that it is so strong and bold that Satan and those under him would go to such great lengths to diminish and destroy God’s work. “For this reason I also suffer these things; nevertheless I am not ashamed, for I know whom I have believed and am persuaded that He is able to keep what I have committed to Him until that Day.” II Timothy 1:12 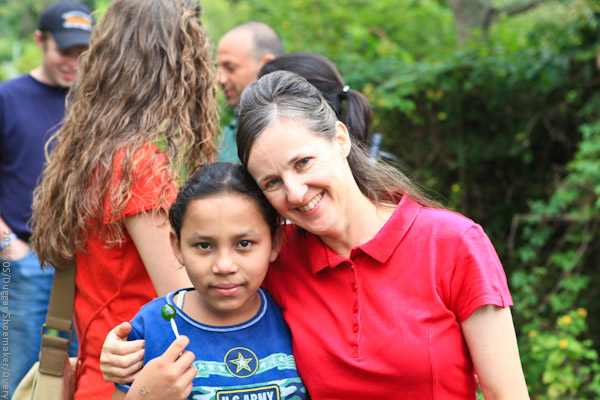 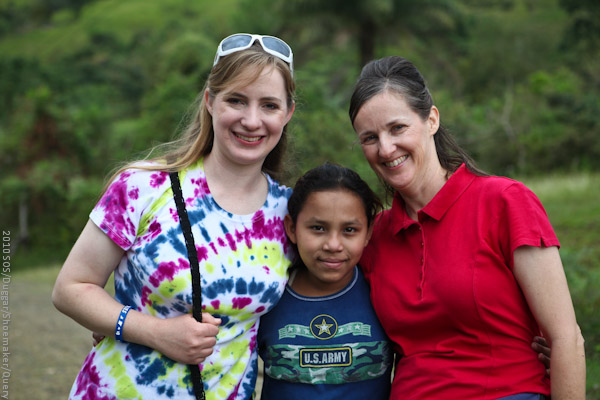 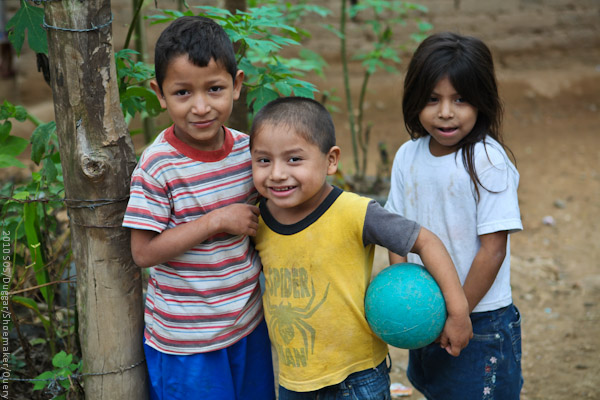 Yesterday, when TLC asked Mike to find two people they could do an interview with concerning the change that SOS/the Duggars had brought to this village, Teodoro’s name was the first. When Mike asked him if he would do an interview for the tv Teodoro enthusiastically responded, si, si, si, si, si, si… (yes, yes). As he stood there with his Santa Biblia (Holy Bible) clasped across his chest and for 45 minutes poured out the story of how God changed his life and faithfully answered the questions asked him by the producer God’s power was evident. After the interview Mike asked the film crew (5 of the 7 are not Christians) what they thought of his testimony all they could respond was, “WOW”. I pray that Teodoro’s testimony will have a lasting impact on these men because they are NEVER at a loss for words. But for the next hour about all you could get out of them was, “WOW”. 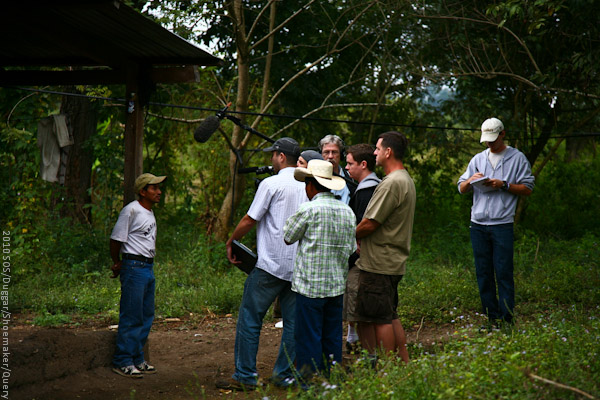 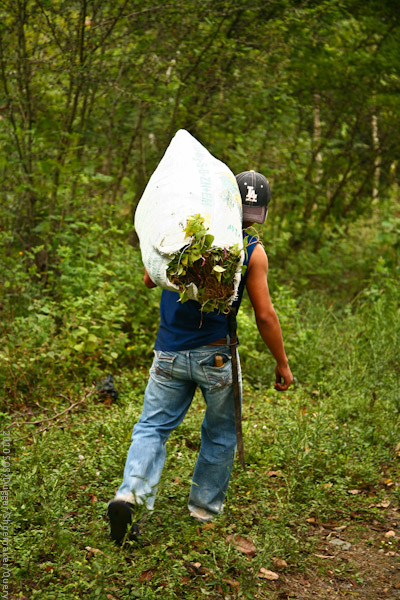 So here we stood with this man in his humble mud house not much bigger than the average bedroom in a house in the states and he is publically giving praise to God for the food and gifts we brought. His house had two rooms, one room had a smoldering fire in the “stove” in the corner and a hammock stretched across the room. The other was only large enough for two cots and room to stand between them. His three children share one cot and he and his wife the other. This man has nothing but a love for the Lord and it is so evident in his daily life. DIOS ES MI ESCUDO 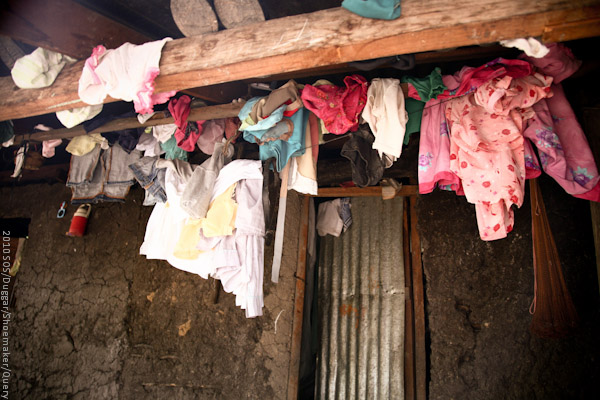 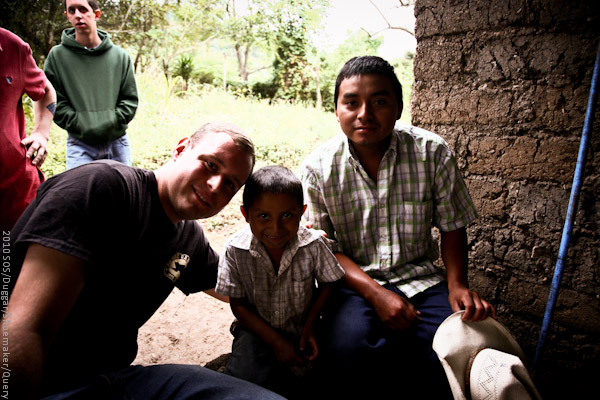 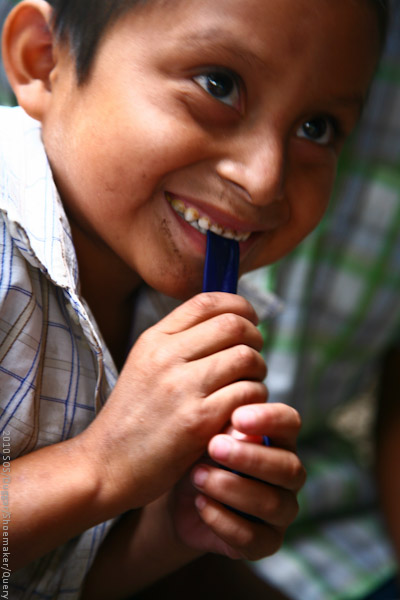 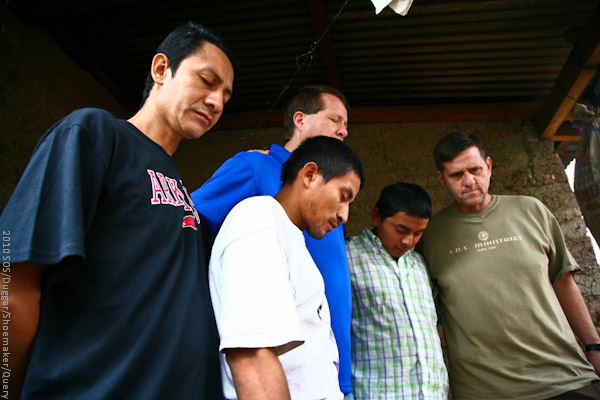 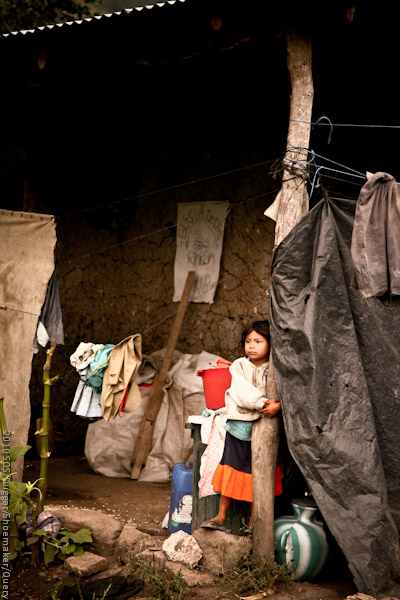 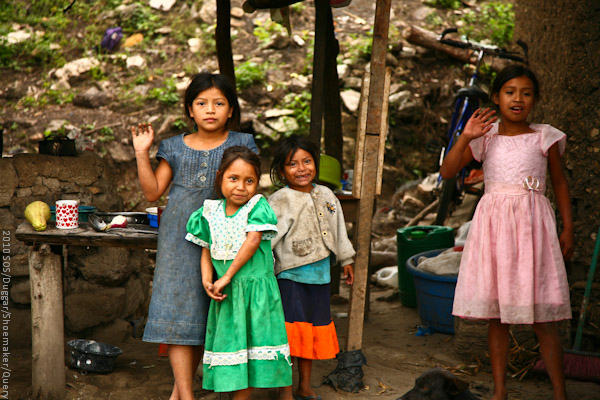 From there we continued on to Copan to the Mayan ruins. As we walked through the grounds and saw the remains of their once glorious but Godless empire it was heartbreaking and humbling. It was heartbreaking to know that they were serving a heartless God who could not hear them or care for them. And humbling to see the passion with which they served stone god’s and offered themselves as sacrifices for a god who could not love them. If each of us followed the Lord’s GO into all the world, command with the same energy and reckless abandon as they did there would be not one people group who had never heard of the love of God.
After the ruins we headed back into Copan where TLC took the entire team out to lunch at a “safe” (food wise) local restaurant. There we had all kinds of yummy local goodness. I loved pretty much all the food while we were on the trip. I do not think that I once had something that I didn’t like. During the meal there was an empty seat at one of the girls table. In the middle of eating they heard something fall into the chair and roll around. At that point a chicken crawled out from under the table cloth from that chair and walked off. It had just laid an egg in the empty seat. :) What a surprise but at the same time this was not surprising due to the culture we were in. After the main meal they brought out a few plates of more exotic local goodness that was pretty amazing. After lunch we said goodbye to the French film crew that had been with us for the past three days. When the French crew had arrived on Saturday as I was greeting the producer she remarked, “You were not kidding when you said see you next week when I saw you last week.” Over thanksgiving we went and played broomball with the Duggars and met the French crew there as they were filming at the Duggar’s house. 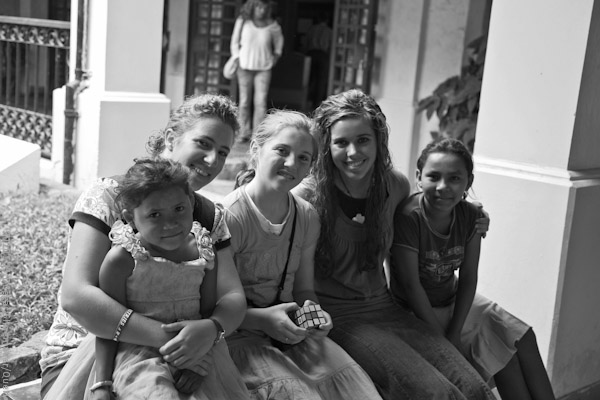 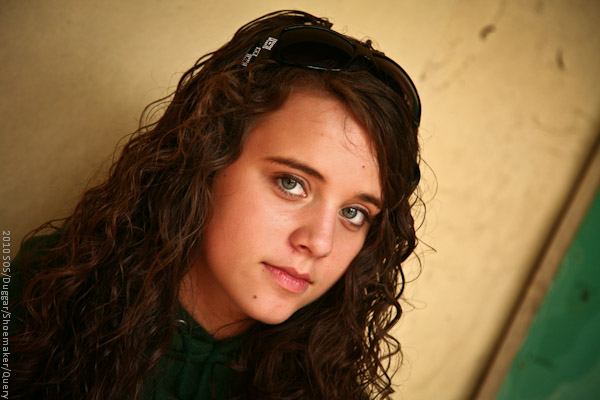 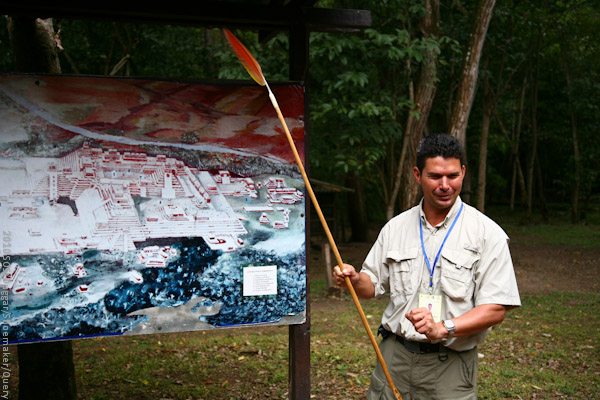 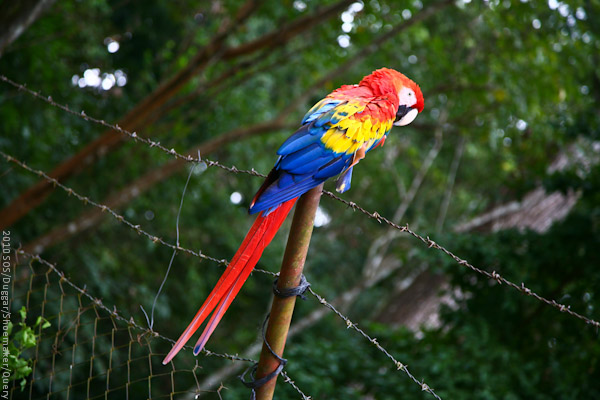 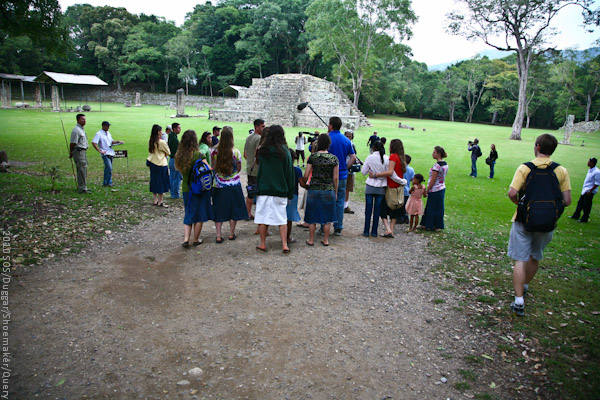 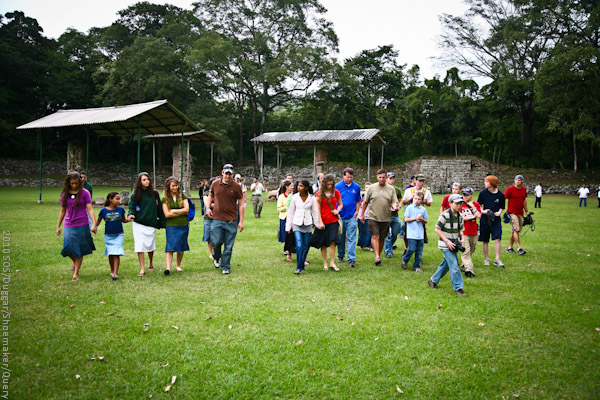 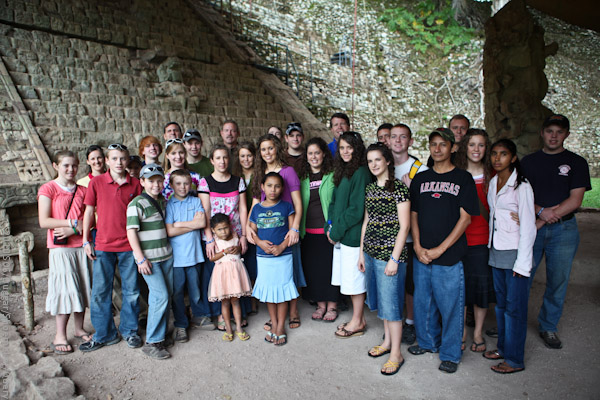 After lunch we walked down the street and passed out gospel of John’s and suckers to everyone we came across. We headed down to the town square and also around a few of the side streets.
We then headed back for a late dinner. Because of how late it was when we got back to the church it was already dark when they were beginning to prepare dinner. As such they would be pulling burning logs out of the fire to hold above their pots to check on the status of the food. In some cases the pots held boiling oil! Seeing that John and I went in and grabbed the last few headlamps and came back out and presented them to the ladies who were cooking. They were thrilled with them and loved using them to cook. The “kitchen” (wooden table, fire, and propane griddle) was not lit with half a dozen bobbing lights. Later during team devotions you could look out the door and see some of the ladies running around playing tag with their new headlamps in the dark. J What a joy it was to know that such a small gift had made such a great impact in their lives. 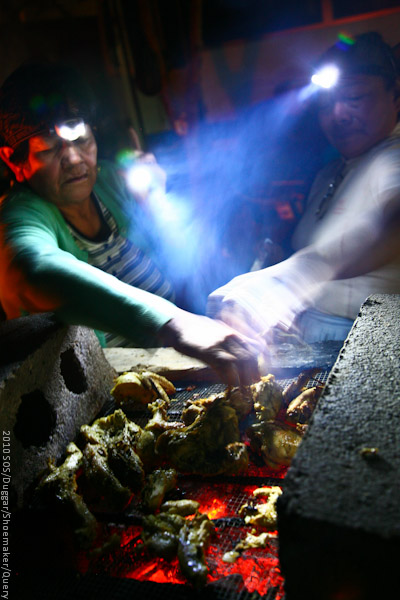 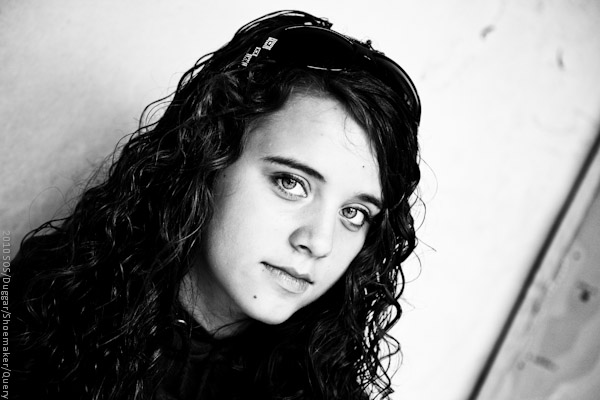 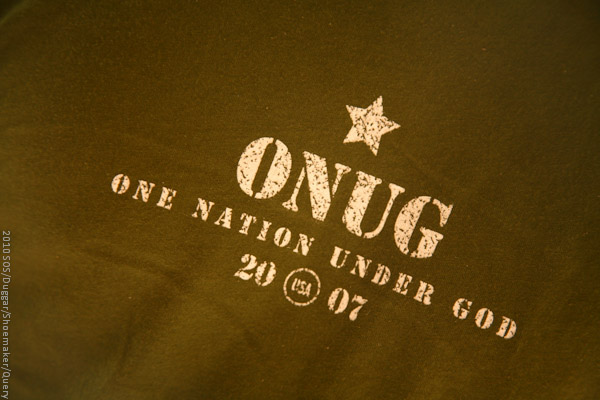 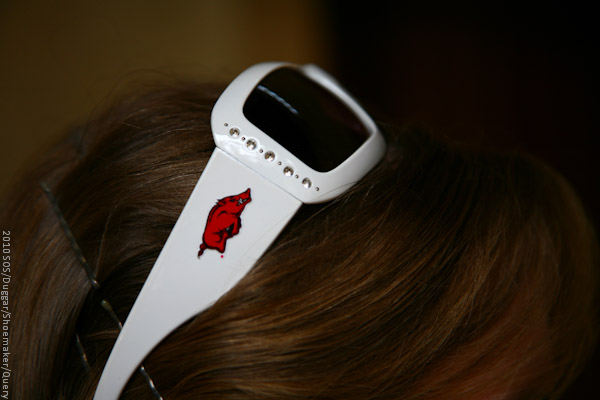 Posted by Richard Shoemaker III at 5:00 AM