In This evening our family watched the movie, "Taking Chance". Taking Chance chronicles the trip home of Lance Corporal Chance Phelps, from the Dover crematory to his rural Wyoming burial in his families hometown as seen through the eyes of his escort, Lt. Col. Michael Strobl. Strobl chronicles the event and emotions surrounding it in his journal. Along the way as escort he was overwhelmed by the outpouring of gratefulness for the selfless sacrifice of a young man they had never even met.


As I watched I was taken back to 2006 and 2007. It was in 2006 that Marine Corporal Jared Shoemaker was killed in Iraq. Boldly protecting the freedoms that we hold so dear. Jared is the son of my dad's cousin. While I did not know Jared well I do know that no matter where he was protecting our freedoms he was also sharing with others about the freedom they could have in Christ. During his funeral our family witnessed first hand the gratefulness and honor of so many people who never knew Jared. Jared was also a Tulsa Police officer who protected our freedoms here at home as well as across the ocean.


In 2007 I was down at the International ALERT Academy working in the Cadet office on a 9 month internship. On August 5th I received a phone call from my family telling me that Corporal Jaron Holiday had been killed in action in Iraq. Jaron had been an active part of our local ALERT Cadet unit up until the day he left for basic training. Jaron was a blast to be around and one the older guys that we all looked up to with admiration. Jaron had a love and passion for the Lord that was only seconded by his love for his family and music. Every where Jaron went his smile was always there to proclaim God's love.

Tomorrow my brother John will be graduating from high school with CHEF. The same group the rest of my family and Jaron have graduated with. At the service tomorrow Mrs. Holiday will present a music scholarship to one of the graduates. A continuing testimony to the life and service of an incredible young man who served God with all his passion. 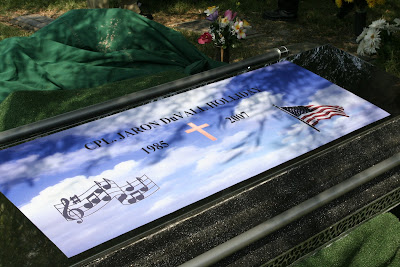 Taking Chance - If you have not seen this movie before I would encourage you to have your parents preview it before hand. There is some inappropriate language and a few moments of inappropriate dress. The story is eye opening to the process of internment and the dignity and honor bestowed on them. It however, leaves out nearly all mention of the Lord and his true comfort and salvation.
Posted by Richard Shoemaker III at 11:10 PM